Looking for a Mandarin version? Check out the 0xChan translation by @maojk.

0xchan is a decentralized and immutable message board system on the Ethereum blockchain where users can post messages and media files. Storage of those messages is handled via a distributed file system and an Ethereum smart contract is used to store a ledger of all messages. An Ethereum staking mechanism ensures quality content and protects the system against spam, while also incentivising users to stake their Ether. The immutable and decentralized nature of the system allows for free speech and gives way to create truly censorship resistant and self-sustaining platforms.

0xChan is not live yet, but the high-level details of the platform are explained below.

Like many other dApps, 0xchan consists of a website front-end that interfaces with a smart contract. The contract serves as a decentralized ledger to write to and read from while files and media are stored on the decentralized IPFS network. The smart contract and the storage is decentralized, the website is not. However, users will be able to clone or fork the website repository and set up an interface either locally on their computer or deployed for others to be able to use.

Users could also send messages directly to the smart contract through the use of tools like MyEther-Wallet or Etherscan. There is no way to restrict a user from sending messages to this contract. The messages sent to the system are similar to a message board post with a subject-line, the full message, and optional file attachments. This allows users to freely express their thoughts, discuss various topics and engage with ongoing discussions or start new ones. All of this happens free from censorship by government or other authorities. 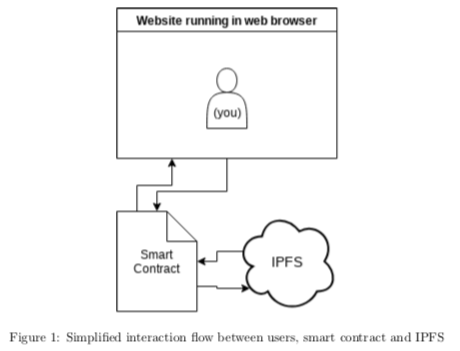 IPFS, or the "InterPlanetary FileSystem" is a self described peer-to-peer hypermedia protocol to make the web faster, safer, and more open. It relies on users operating so called nodes to distribute server load and content storage across multiple machines with a certain level of redundancy.

Users can interact with IPFS either through the use of a command line interface, desktop or mobile applications, or by using web interfaces. You can learn more about IPFS in the IPFS Whitepaper.

Users can either browse 0xchan and just read the conversations or actively participate in them by posting messages. Simply browsing the dApp for content comes at no extra cost to the user, while posting a comment will invoke a small fee. This fee prevents spam bots from using 0xchan as a dumping ground for malicious or otherwise irritating content, so users can focus on real discussions.

The requirement for each user that wants to post on 0xchan is to have a minimum of 0.5 Ether locked in the contract. This will be used as stake and collateral at the same time. Staking requirements for sending messages with attachments is increased to 1.5 Ether. The Ether sent as stake can be withdrawn by the users anytime if they did not post in the past 24 hours and there are no pending reports. The stake will also assign users a certain percentage in the distributed rewards system.

Each post sent to 0xchan costs an additional 0.0001 Ether fee which is distributed among all stake holders, with 15% used to purchase P3D and a 5% portion of it will stay in the contract to be used to settle expenses. This fee should make it expensive enough for people to not spam the system with useless content, but low enough to allow for easy entry into free discussions.

The price for a message can and should be adjusted to meet market conditions. Users can also pay this fee in advance by purchasing ZCH, an ERC-20 token, in advance. This will also increase their overall percentage in the stake sharing pool. When users choose to use ZCH to pay for a post, they will only have to pay the Ethereum network fee which is kept at the lowest minimum possible due to gas optimization processes in the smart contract.

0xchan will continue to purchase P3D tokens from the P3D smart contract with each new message posted on 0xchan. As such it will generate dividends for the P3D network and also receive those dividends just the same. The dividends collected that way can then be released by users once every 3 months to give it enough time to accumulate dividends similar to how Ethorse is handling it’s P3D integration.

A report is filed by users and will evoke a checkup mechanism with the community. Reports cost a small fee of 0.001 Ether that is kept during the review process as collateral so there’s no incentive for users to false-flag a post. If the review results in an actual moderation of content then the fee will be returned to the reporting user in addition to 10 ZCH token; if it was a false-report however the moderators will keep the fee for themselves.

Moderation can be done by anyone who has staked 10 Ether. This stake is locked and can only be withdrawn if 3 months have passed since the deposit was made. All incoming rewards will also be locked for 1 month. A publicly visible page will show all content that received reports and users who are eligible to vote (read: meet the staking requirement) can vote on the posts in question.

Five votes are needed to complete a round of voting, no more than that can be entered. Voting only invokes network fees. All voting participants are provided with additional 10 ZCH token each as payment for their voting participation. Each report stays pending for one week to give enough time for moderators to act. Moderation can only take place on the website and will not delete content on the IPFS storage or the smart contract. Users can circumvent this with a self-hosted version and supply their own filterset. The moderation functionality (staking and voting) will take place on a separate smart contract which will be queried by the 0xchan.net web interface in conjunction with the 0xchan main contract.

On 0xchan.net we will deploy a filter mechanism to automatically hide media attachments in posts by default, as well as shadowban certain content (for example certain problematic images of pornographic nature). Users can choose to disable the filter on their own accord, but shadowbanned content will always stay hidden. If content has been shadowbanned, the poster’s stake (Ether and ZCH tokens) will be liquidated and evenly shared among the moderators.

A: 0xchan is a decentralized and immutable message board system on the Ethereum blockchain where users can post messages and media files. Storage of those messages is handled via IPFS and a smart contract is used to store a ledger of all messages. A PoS style mechanism ensures quality content and protects the system against spam, while also incentivising users to stake their Ether. The immutable and decentralized nature of the system allows for free speech and gives way to create truly censorship resistant and self sustaining platforms.

A: Phase 1 will be the launch of the ICO, as well as reveal of roadmap and unabridged whitepaper.

A: We want to accelerate development of 0xchan, so we need to make this our full-time job. To do that we need income. That's what the ICO does: support us in getting development done ASAP.

Q: Does the ICO require a KYC ("Know Your Customer")?

Q: Are certain countries not allowed to participate?

A: Everyone can take part in the ICO and 0xchan post-launch. There are no borders on the internet.

Q: Is this related to the 0x token?

A: No. Ethereum addresses start with 0x, hence the name.

A: ZCH is the token used within 0xchan to pay for posts but also to add to your overall stake and rewards.

Q: Is there a maximum amount you are allowed to stake?

A: There is a maximum of 2 ETH you can stake directly, more ETH deposited will be transformed into ZCH.

Q: Will the posting fees be adjusted as the price of ETH changes?

A: The aim is to keep the fees as small as possible in relation to the current ETH prices. So yes, adjustments will take place.

Q: As a moderator, are you limited at all in how often or when you can vote?

A: The answer to that will be found in the unabridged whitepaper dropping early 2019.